This newsletter can be described as a double edition in that it looks back to both the AGM, held at Trinity U.R. Church hall in Crookes Street on Wednesday July 9th, and also the committee meeting held at the home of chairman, Paul Taylor, on Monday, July 28th.

AGM 9th July 2014
The AGM was attended by 23 members who accepted the new constitution put forward by the committee.

Secretary Dale Rivers described the year as a success both on the social front, in which events including a members’ BBQ, Christmas ‘Do’ and post-panto meal-out, and in terms of productions. The latter comprised of Sally Davies’ ‘Not With A Bang’ Bob Willerton’s pantomime ‘Robin Hood And The Babes In The Wood’ and Karen Slater’s ‘Home Is Where Your Clothes Are!’ which also formed our entry to the Wakefield Festival and subsequent awards. Another encouraging factor was that the society’s Facebook page now has 107 followers.

Treasurer Ruth Willerton reported that the society’s bank balance stood £565 below last year’s figure but pointed out that significant sums had been spent on the new stage extension, the technician’s perch, cushions for audience seating, an external display cabinet and other improvements.

COMMITTEE CHANGES
The AGM also saw Karen Slater and Peter Horner step down from the committee, their places being taken by Andrew Crossland who will also take over Peter’s duties as social secretary and Neil Barham. Jim Parkinson is to take over Karen’s role as vice chairman with special duties in the collection of membership subscriptions. 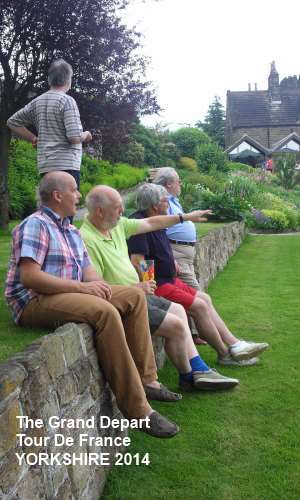 members to attend, speak and vote but held around six months after it – was accepted without dissent.

PAYING OUR WAY
Having learned that two payments, totalling £230 had been made to the church during the year, the meeting agreed to donate the same sum as last year (£2,000) to the Church Gift Day but being subject to review in six months’ time.

COMMITTEE MEETING 28th July 2014
Andrew Crossland and Neil Barham were welcomed to their first committee meeting by chairman, Paul Taylor, at the meeting on July 28. They, together with secretary Dale Rivers, treasurer Ruth Willerton and vice chairman Jim Parkinson decided that the October play should not see raffle proceeds shared with the Hallam FM children’s charity. That arrangement, however, should reconsidered for the production after that.

NEXT PRODUCTION
Director Paul Taylor reported that he had fully cast and held the first rehearsal for Andrew Crossland’s play ‘Best Served Cold’ which is to be staged at Trinity from October 1st to 4th. Set construction is to start shortly and attempts will be made to obtain free publicity in local newspapers on the ‘local writer’ angle. Ticket prices are to remain at £6 (£5 concessions).

FUTURE PRODUCTIONS
Members were informed that Bob Willerton’s offer to direct next year’s pantomime production was the only one received so far. They therefore supported his suggestion of staging ‘Snow White and The Seven Dwarfs’ on January 16th, 17th and 18th and January 23rd and 24th (no dates clashing with Barnsley FC home matches) again at Trinity. Performance times and the possibility of an 8th performance on the final Sunday are to be discussed at a later date.

Dale Rivers reported that the Lamproom Theatre had been contacted with regard to the staging of ‘Whose Life Is It Anyway?’ and the most likely appropriate slot there appeared to be Sunday, June 7th to Saturday, June 17th 2015. Unfortunately that would mean the production’s opening night being at the Wakefield Festival rather than at the Lamproom. Paul Taylor is to direct.

NEW TECHNOLOGY
Members agreed to investigate the cost of providing walkie-talkies for tech and backstage and also a switch to another company for the booking-office mobile phone.

SUBSCRIPTIONS
Jim Parkinson reported that 23 members had, so far, paid their membership subscriptions in line with the AGM decision that subscriptions remain at £5 for adults (free to those aged 16 and under). The firing squad is being readied for those adults not paying up by August 31st.

SOCIAL
The committee agreed to thank former social secretary Peter Horner for organising a fabulous day out at Richmond on July 26th. They also noted their appreciation to Peter and Jeff for this year’s BBQ, the invitation to watch the Grande Depart Tour De France from their home and to return there for the Hunters’ Moon event on Saturday, October 11th.

Members wishing to attend this year’s Christmas ‘Do’ at Barnsley FC’s Oakwell Suite on Friday, December 5th are reminded that they have to get their deposits of £10 per person to Peter within the next three weeks to take advantage of a free half-bottle-per-person wine offer. Andrew will be responsible for collecting the balance nearer the date.

NEXT MEETING
Monday September 1st at 7.30pm
All comments etc. to: committee@trinityplayersbarnsley.com