The best news from Trinity Players this month are that future productions promise to be a lot more colourful!

That’s because the October 30th meeting of the committee saw unanimous approval given to the purchase of seven new stage lights at a cost – including wiring – of £260.  In an emotional appeal for the cash made from a kneeling position, Jim Parkinson said the new LED lights would not only offer change of colours at the touch of a control-panel slide-button but also brightness variation in sequence with the music. (Big ‘Oooh!’ please)   Best of all, the new lights operate at just 15 watts meaning there may well be financial savings as they take over the role of existing lighting.

Jim assured the meeting that the lights will be up and running in time for this year’s pantomime.

One reason for the committee’s decision may be that the treasurer, Ruth Willerton, reported that the October production, Best Served Cold, appeared to have made a profit of around £1,000.  (Please listen for the jubilant trumpet fanfare) 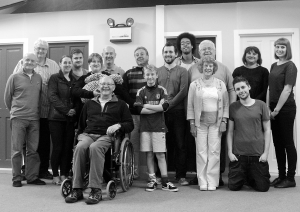 Director Paul Taylor said he believed that Best Serve Cold appeared to have been well received by audiences as well as being financially successful.  For him as director, it had been both an “adventure” and a “joy” thanks, in no small part, to Neil Barham’s idea of revolving set walls, a talented and committed cast and help from all quarters.  The production was additionally enjoyable because it was the first time he had directed a play that he had never seen performed previously.  Paul’s appreciation was echoed by the play’s author, Andrew Crossland, who thanked committee members for “taking a chance with it.”

FUTURE PRODUCTIONS (GENERAL)
Full discussion took place on a motion from the chair that consideration should be given to staging an additional play during the next year to capitalise on the recent increase in membership.   It was decided that with next year’s spring play ‘Whose Life Is It Anyway?’ being staged later than usual in the year (June) there was insufficient time to put on an additional play this year.    That did not, however, rule out such a move if membership remains so healthy.

FUTURE PRODUCTIONS (SPECIFIC)
In the absence of cold-suffering director Bob Willerton, Jim Parkinson announced that casting for ‘Snow White And The Seven Dwarfs’, being staged at Trinity on Friday, Saturday and Sunday January 16th, 17th and 18th and Friday and Saturday January 23rd and 24th 2015 was almost complete.  The only problem was that some cast members were currently busy with rehearsals for ‘Oh What A Lovely War’ being staged at the Lamproom this month.  For that reason, it had been decided there should be no meeting of Trinity Players on Wednesday November 5th.

Anne Prew told the meeting she was investigating the possibility of again gaining pre-show publicity by cast members appearing in costume within Barnsley’s market complex or, if that is closed for redevelopment work, within the Alhambra Centre.   The latter could, she warned, be considerably more expensive.

Dale said he was putting the finishing touches to the advertisement poster and Andrew undertook to produce a promotional video.

SOCIAL
Andrew Crossland announced that plans for a ‘come dine with me’ experience had been put on the back-burner for the present time.  The Hunters’ Moon evening at the Langsett home of Peter and Jeff, however, had been enjoyed by all and the Christmas Dinner event, being held at Barnsley FC’s Oakwell Suite, was also proving popular with around 30 members booked to attend on Friday, December 5th.  Anyone yet to pay the balance should see Peter Horner before he has put the finishing touches to the rack in his cellar.

Two Trinity members putting their skills to further public scrutiny this month are Jane Laverack and Jeremy Cutts.  Jane, scheduled to play the Mirror in our pantomime, is appearing in Sleeping Beauty which is being staged at 7.30pm on November 20, 21 and 22 with a 2.15pm matinee also on the 22nd   at St. Austins in Wentworth Terrace, Wakefield.  Tickets are available by phoning Anne on 01924 382371 or by visiting www.StAustinsPlayers.co.uk .   Jeremy, who is playing our Dame in SWATSD, is appearing as his ‘Gyrating Jeremy’ alter-ego at the Bridge Inn, Cote Lane, Thurgoland,from 8pm on Sunday, November 30th.  Both Jane and Jeremy would appreciate your support.

Last but not least, the first read-through of Andrew Crossland’s follow-up offering, Best Served Cold 2, is to be held at Esther Dyson’s home on the evening of Friday, November 21st.  All those interested in attending should contact Andrew in the first instance.

NEXT MEETING
Monday December 8th, 7.30pm at the home of Dale Rivers.

All comments etc. to: committee@trinityplayersbarnsley.com